How to find us

Please click on the map below to enlarge it! 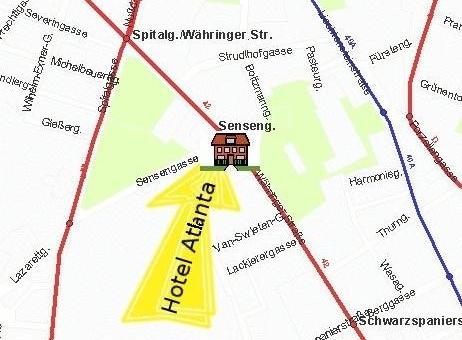 After arrival at Wien Schwechat airport, there are several ways to get to Hotel Atlanta:

The river Danube is not only used for romantic leisure travel but also for regular travel to/from Vienna to Budapest (Hydrofoil) and Bratislava. Click Twin City Liner and DDSG Blue Danube for more information. Take U1 to stop Karlsplatz/Oper, switch to U2 and exit at stop Schottentor, switch to tram 37, 38, 40, 41 or 42 and exit at stop Spitalgasse/Währinger Straße.

“Treppelweg” is an enchanting bicycle route. You can ride your bike along the river Danube from Passau to Vienna and beyond. Click Radrouten durch die Stadt for more information.

These trams take you to Hotel Atlanta, whereas the tram stop into town is called Sensengasse and out of town Spitalgasse/Währinger Straße.